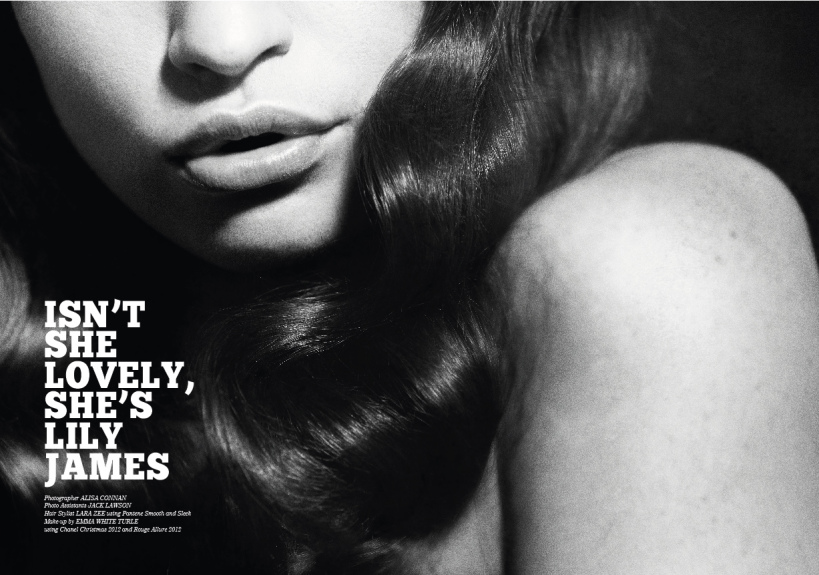 Beautiful British actress Lily James featured in a portrait session with photographer Alisa Connan for Beauty Rebel #1. The star who recently became part of the cast in Downton Abbey, shows us the allure of her personality and also was kind enough to sit for an interview with us! Which you can read in full below…

As many would say, you have been “graced” with beauty, but have there ever been any occasions where you have found it a hindrance? Felt that people have had pre-conceptions about you?

Ahhh I don’t know about that!!  But as an actor you tend to be placed into boxes with regards to casti, and I suppose I often go up for the “young pretty posh” sort of parts. So it’s definitely important to try and show that you are versatile and mix it up a bit.  Because really, everyone can get dressed up to look all glamorous especially with the help of great make-up artists and beautiful dresses, but you can also get caught on a bad day (or maybe just the more normal days actually) and not look so great, which is also fine.  I definitely want to play all sorts of different roles based on me and my acting, not on my look.

Your star has risen in a very short space of time, has it been a shock? What elements of your life have you had to adjust the most because of this?

I have loved my career so far and definitely feel so lucky that I have got to do lots of varied work and just to have kept working!  But I haven’t had to adjust much yet.  I guess things come in waves and there’s all the buzz and excitement when you are promoting a film and during that time I just remind myself to focus on the positives and not get too caught up in the superficial world of it all. But now I am right back to just trying to find another job! Don’t think that ever stops.

You have said you related to your character Lisa’s (Fast Girls) competitive personality and blinkered drive – do you ensure you take time to enjoy life? And if so, what do you do in this time?

Yes I think I live to real extreme. I need to watch that!  During Fast Girls I got really obsessed with the training and it took over my life.  That ended up getting me quite down not to mention I got these cysts in my eyes from all the stress and the changes to my diet. But that taught me that you have to keep a balance.  I really do enjoy life through working, but it’s definitely not the only thing, its not enough.  I need to see friends, go to the pub, try and get away somewhere, listen to music –  anything to shut down and live a bit!

Just read Franny and Zooey by J.D Salinger on holiday.  Film……. That question is impossible…..  but recently watched Marilyn Monroe in ‘Some Like it Hot’.  Unbelievable.

While receiving rave reviews playing Desdemona alongside Dominic West in the evening, you were also training six hours a day – sometimes to the point of vomiting for Fast Girls; what drives you? How do you motivate yourself to do something like that?

I didn’t have a choice really!!! I was having nightmares about wearing those skimpy running pants and tops.  Plus I have always really wanted the challenge to try and change entirely physically for a role.  Sort of had Tom Hardy and Natalie Portman in mind!  And to be honest, going on stage everynight as Desdemona was a complete joy, nothing would have ever distracted me from that, I didn’t need any motivation!

Having played Desdemona, you obviously have an understanding and appreciation of Shakespeare – do you think we have a modern day equivalent? If so, who? And if not, what do you think writers today are missing that Shakespeare had?

I think Shakespeare is pretty incomparable, but I recently worked with Martin Crimp and his writing is so guttural and instant, meaning the actor has to do less as it’s all in the words. And I just saw Tender Napalm by Philip Ridley and that was epic and incredibly poetic, had a whole life force behind the writing. Jez Butterworth too, when I watched Jerusalem I was in awe.  It’s so provocative and sensual and that is what I love about Shakespeare – the sensuality and rhythm and momentum of it all, which I think, yeah, modern writers can capture too.

If you could choose any person in history to play who would it be and why?

I love music.  I think I can sit and watch old YouTube clips of people like Etta James , Joni Mitchell, Nina Simone and Chet Baker for longer than I could watch films, so I would love to play a musician in something. Someone like June Carter, but damn it, Reece Witherspoon got there first!!!

You have recently joined the cast of Downton Abbey, what can we look forward to from Lady Rose? How would you describe her personality?

I am so excited about this series.  And it is such an honour to have joined the cast.  I cant tell you anything about Lady Rose I am afraid you will have to wait and see…

What is the last thing you do at night?

Set my alarm and then check it twice! 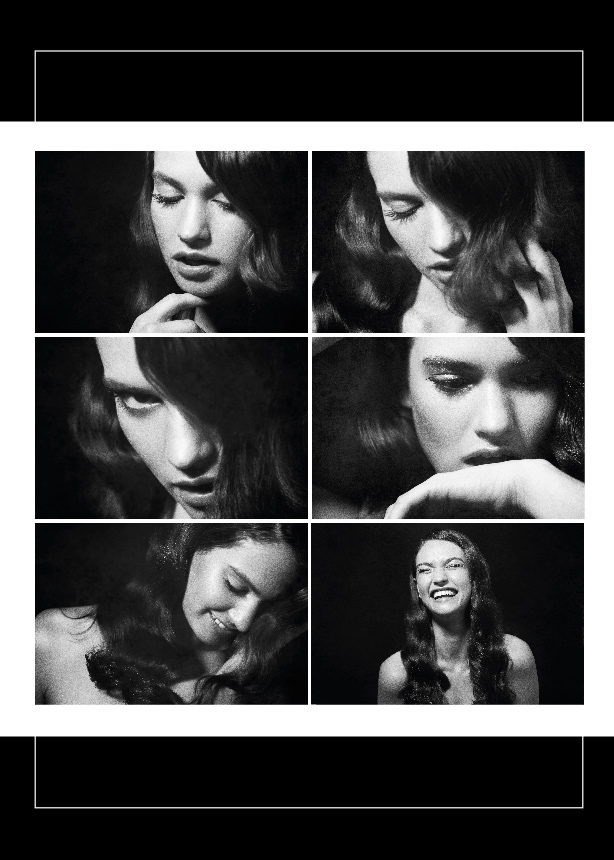 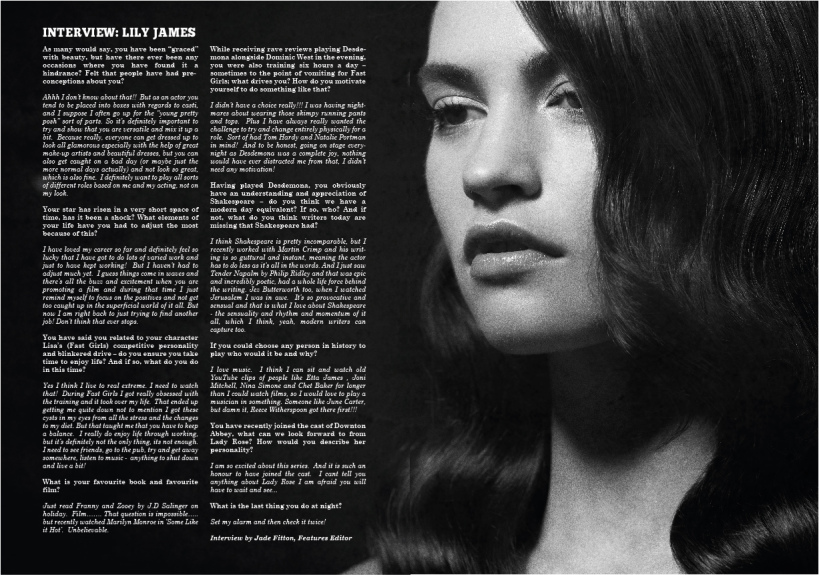 Written By
admin
More from admin
Anabel Krasnotsvetova at Next London features in this beautiful lookbook for the...
Read More